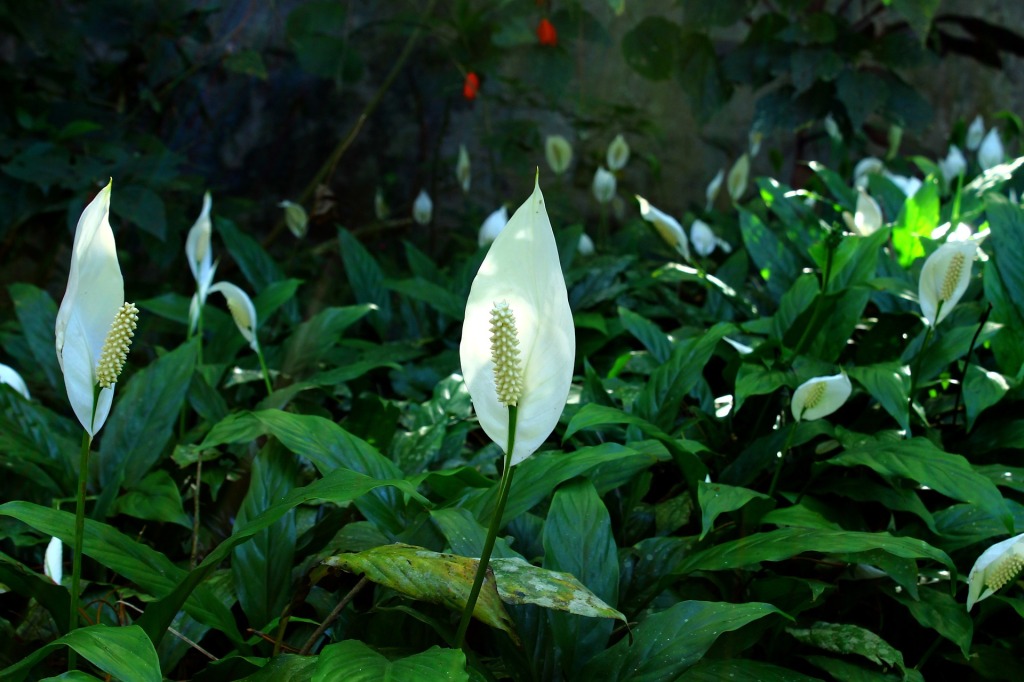 I have heard other people talk about receiving visits from loved ones who have passed away. I always hoped family members might send me a sign after their death, but I never imagined my sign would come from a houseplant.

I am not a gardener. In truth, I am a plant murderer. I confess to being known as the cause of death for multiple species. My sister Caroline sent me a basket of plants as a gift when I turned 25, and friends placed wagers on how long the plants would survive, varying from three months to two years. All five plants were dead and gone within a year.

Despite my best efforts, I simply do not have the ability to keep plants alive. Something was different with the peace lily.

My peace lily, a sympathy gift from colleagues, arrived on New Year’s Eve, two days after the death of my sister Mary Jane. I was sitting in my dining room watching the sunset creep across the sky when the doorbell rang. I peeked outside and saw the plant. Three tall white flowers stood like sentinels above the waxy green leaves, obscuring the face of the delivery man.

My sister Mary Jane loved flowers. She sent bright floral arrangements to our mother each spring. She was a regular at a local elementary school’s annual plant sale, always looking forward to getting her pansies and peonies in the ground. Mary Jane once arrived with  carnations at my house, along with bread and milk, when I was too sick to shop. After a devastating diagnosis of brain cancer in her mid-50’s, she told me flowers from friends and family brought her sunshine and renewed faith when she had doubts.

Opening the peace lily card, I stared at the brilliant white flowers and wondered who would send ME, the plant murderer, such a glorious gift. The poor plant. The full lush emerald leaves could not know their days were numbered in the house of doom. I was appreciative of the thoughtfulness behind the gift but feared I would never be able to honor Mary Jane’s memory and keep this fine plant alive.

I performed the usual tasks, watering it and talking to it regularly. My sister Sandy helped move it to a larger pot where its roots had room to grow. Determinedly, I gave it every advantage I could in my efforts to help it survive. The plant was a link to Mary Jane, a means to somehow remain connected to her spirit. When I looked at the plant with its flowers still managing to stand at attention, I felt renewed faith I might endure the great grief and pain of losing one of my five sisters.

The first additional flower bloomed in late March, on the day our Uncle Bart died. I entered my house with tears in my eyes, having received the news on my way home, and saw the new white blossom opening above the leaves. A shiver ran through me, and I felt my sister’s presence as I exhaled a prayer of thankfulness.

It’s just a flower on a plant. It doesn’t mean she’s here.

But it doesn’t mean she’s not.

The flowers kept coming that year. The second flower arrived the same day Mary Jane’s granddaughter turned two. The third opened on my sister Susan’s birthday. The fourth appeared on Mary Jane’s wedding anniversary. When I saw two blossoms the day Mary Jane’s husband passed away from a rare cancer six months after Mary Jane’s death, I sobbed for an hour. Surely she was telling me they were together again. It was what I wanted to believe, and gave me comfort in my grief.

Somehow, my plant continued to survive – thrive you could say! Over the next year, I continued to discover flowers on meaningful days. Each time a new blossom appeared, I once again felt Mary Jane’s presence. The flowers served as reminders of the beauty which can still be found in darkness and grief, and faith which can help us weather overwhelming loss.

The peace lily is often given as a sympathy gift because the white flowers symbolize the departed soul finding happiness as it transitions from the physical to the spiritual world. During the year following her death, whenever a new flower bloomed, I felt I had received a message from my sister telling me her soul was at peace.

I have managed to keep this peace lily, Mary Jane’s peace lily, alive for almost five years now. Sometimes months will pass without a new flower. Then, when I am convinced it will never bloom again, Mary Jane sends me a reminder to keep the faith. The flowers always materialize on meaningful days. Last year, the only time the plant produced a blossom was the day our Uncle Tony passed away. This year I discovered a flower on what would have been her husband’s birthday.

I cannot explain why the flowers appear when they do. Folklore says peace lilies bloom when they are happy or content. I am skeptical any plant could be happy in my house, but I am willing to believe Mary Jane’s soul is indeed content. I know she is with me and my sisters when we share memories of our times together. And if I need a reminder to have faith our souls will meet again someday, new flowers ascend above the thick green leaves. These white flags of peace stand as the sentinels I saw when I first glimpsed the plant, watching over me and providing encouragement to soldier on.

32 thoughts on “The Peace Lily”

This site uses Akismet to reduce spam. Learn how your comment data is processed.

I am an advocate with a strong career, a baker with a love of cookies, and a crocheter who can't escape a yarn shop without feeling every skein. I decided to write after years of hearing "You need to write these stories and share them." Be careful what you demand of me!

Dee Tweets – do you?